Team Ronin is super excited about Gen Con this year, especially with the success of our updated Freebooter GM Program. We decided to focus on our one big event, as we’re kinda small to support events all over the country and beyond. Make with the clicking to read about the program here.

Many folks think Green Ronin is a huge company, but we’re actually very small. The upside to this is that we can work closely with our GMs to grow this program; it wouldn’t be as successful without their spectacular feedback. And since it was our first big push, with setting up GM Badges and hotel reimbursement, it helped us make the 2017 Gen Con program even better.

For the folks who signed up early, who communicated well with us about their needs and desires, it was super easy to accommodate folks, like subbing out GMs when we had scheduling issues. For folks to get hotel reimbursements, it was super easy! You just had to email me your receipt and we sent you the reimbursement! Almost everyone followed directions well so we were able to take care of just about everyone by the time Gen Con was all finished!

We had a lot of folks GMing for us who had never been to Gen Con before, or GM’d at a convention ever, which meant so much to us. And our experienced Veteran GMs were on hand to help out the new folks. The Freebooters are a small team, but a wonderful team! Heck, a bunch of new folks to our program even got together and split a room together! They held each other together while I was off doing Geek & Sundry and Gen Con Industry Insider stuff!

Many GMs kept things simple, and many of them printed out great color sheets, special hand outs, and whatnot. Some GMs used our published Quick Start adventures, some used their own home brew. Some used adventures which we haven’t yet published, to be the first to run said adventures.

Why am I tell you all this? Because we want you to run our games! Everyone is welcome, no matter your experience, or lack thereof. If you have GM’d a home game, you can GM for us! You can run what you want, when you want.

And if you want to, we’ll arrange a GM badge for you, so you can get reimbursed by the Gen Con system, and we’ll reimburse you for part of your hotel.

AND! Based on feedback from the 2016 GM Team, we’ll have ribbons and dice for you to give your players, plus a variety of other hand outs. And maybe something cool for YOU, too! We’re still hammering out those details. 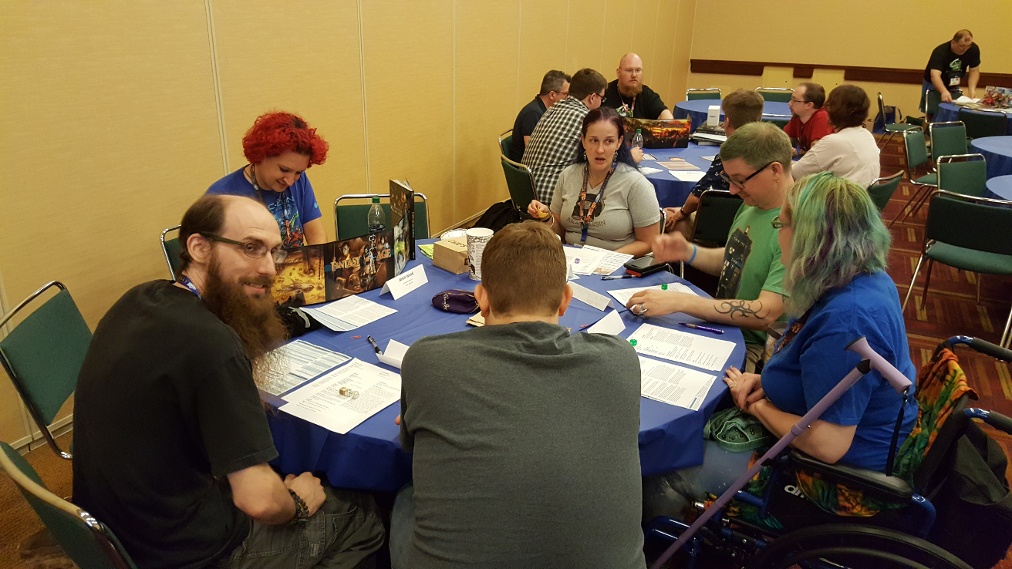 If you’re interested in signing up, click here to fill out this quick contact form. Early submissions have started this week, and will run until Feb 19th. Regular Event submissions are due by March 26th, so we want to get your games in the system as soon as possible. I can help!

If you have general questions, you can email me directly! donna@greenronin.com

Evan got his start in the hobby game industry in 1995, as a co-founder of Rubicon Games. Among other games, he has worked on Cranium, Cranium Hullabaloo, and the Pokémon trading card game. RPGs he has edited for include Everway, Ork! The Roleplaying Game, Spaceship Zero, Warhammer Fantasy 2e, the d20 System, A Song of Ice and Fire, Mutants & Masterminds, Dragon Age, Fantasy AGE, Pathfinder, and Critical Role (5e). He has been managing our web sites since about 2002. He co-designed Walk the Plank, our card game of piratical trick taking.